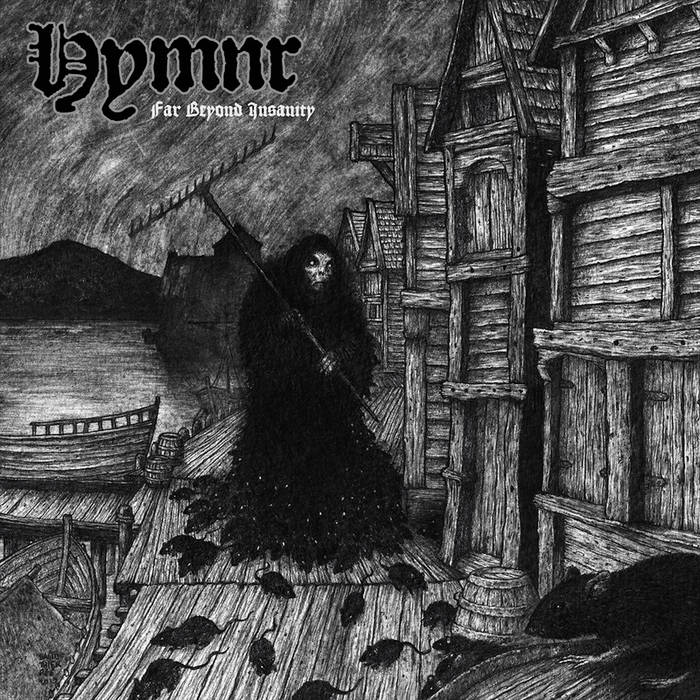 It was the shuddersome cover (by the masterful David Thiérrée) of Russian black metal band Hymnr’s debut album Far Beyond Insanity (Saturnal Records) which stopped me in my tracks as I wandered the lonely highways of YouTube.

HYMNR is an entity, a formation that spawned itself. The music, the story, and the concept of HYMNR is its own tale, charting the tragic path that has led the world, humanity, and religion on a downwards spiral. What HYMNR is, no one can say, except maybe the individual minds of the ones who are willing to embark on this journey.

Within the initial one minute thirty seconds of Far Beyond Insanity Part I – there’s the darkly inviting sound of waves breaking a shoreline*, a thunderstorm booming overhead and stirring, faint chanting – I thought ‘this is something fucking special.’

V’s vocals are gnarly, distinctive and gripping. The sorrowful melodies carried me along like I was riding atop the river of rats streaming from the plague maiden’s garments. It’s a curious, chilling, exceptionally well-paced song that rattled me the right way.

*It could well be rain. Listen and let me know what you think!

Update: Just learned that the name of the artwork on the cover is ‘Pest at the Dock.’

The witches are listening. View all posts by ahexonyourhead